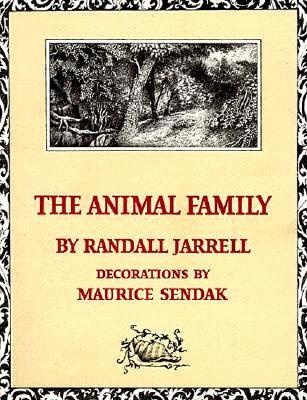 This is the story of how, one by one, a man found himself a family. Almost nowhere in fiction is there a stranger, dearer, or funnier family -- and the life that the members of The Animal Family live together, there in the wilderness beside the sea, is as extraordinary and as enchanting as the family itself.

Randall Jarrell (1914-1965) received the National Book Award for his book of poems The Woman at the Washington Zoo. His children's book The Animal Family was named a Newbery Honor Book, and his translation of The Three Sisters was produced by The Actors Studio Theatre.

Maurice Sendak’s children’s books have sold over 30 million copies and have been translated into more than 40 languages. He received the 1964 Caldecott Medal for Where the Wild Things Are and is the creator of such classics as In the Night Kitchen, Outside Over There, Higglety Pigglety Pop!, and Nutshell Library. In 1970 he received the international Hans Christian Andersen Medal for Illustration, in 1983 he received the Laura Ingalls Wilder Award from the American Library Association, and in 1996 he received a National Medal of Arts in recognition of his contribution to the arts in America. In 2003, Sendak received the first Astrid Lindgren Memorial Award, an annual international prize for children’s literature established by the Swedish government.