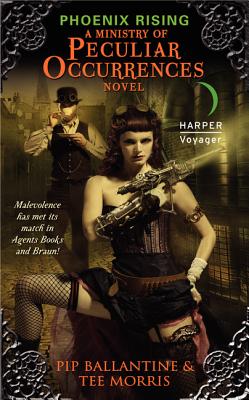 This is book number 1 in the Ministry of Peculiar Occurrences Series series.

A charming steampunk novel in which our heroine, Ministry Agent Eliza D. Braun ("the brawn") and hero, Archivist Wellington Thornhill Books ("the brains") battle nefarious secret societies bent on world domination all the while engaging in witty repartee and upholding staunch British values.

Born in New Zealand, Philippa (Pip) Ballantine has always had her head in a book. A corporate librarian for thirteen years, she has a Bachelor of Arts in English and a Bachelor of Applied Science in Library and Information Science. She is New Zealand's first podcast novelist and has produced four podiobooks. Many of these have been shortlisted for the Parsec Awards, and she has won a Sir Julius Vogel Award. She is also the author of Geist and the soon-to-be-published Spectyr. While New Zealand calls, currently Philippa calls America home.

While Tee Morris began his writing career with Dragon Moon Press's 2002 historical epic fantasy Morevi: The Chronicles of Rafe and Askana, it is his podcast of that book and works such as Podcasting for Dummies and All a Twitter that have earned him the distinction as one of the pioneers of social media. With Phoenix Rising, Tee returns to where he prefers to be—his imagination. When he is not there, Tee lives in the Washington, D.C. area with his five cats and one daughter, all of whom have him very well-trained.