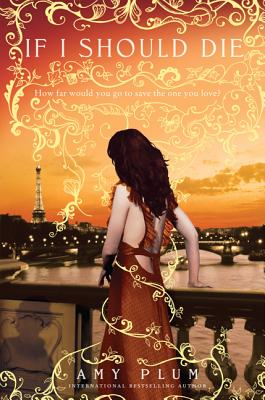 This is book number 3 in the Die for Me series.

If I Should Die delivers a stunning, deeply satisfying conclusion to the international bestselling Die for Me series by Amy Plum. VOYA raved, "There is plenty of romance, danger, and unpredictable turns against a backdrop of Paris. Those looking for something beyond the Twilight series will enjoy these fast reads about immortals."

Kate is devastated. Her boyfriend, Vincent, is a revenant who has waited lifetimes to find her. But once he did their future together was shattered almost immediately. They were betrayed by a trusted ally who killed Vincent and destroyed his body so that he could not be reanimated. Now Vincent is doomed to roam the earth as a spirit. But Kate isn't willing to accept life without her true love. She'll risk anything to save him, even as their friend-turned-enemy begins to wage a war to rule over France's immortals.

Amy Plum created an intricate, original mythology for this young adult paranormal series. The books, set in the City of Lights, introduce readers to revenants, undead beings who must sacrifice themselves again and again to save the lives of strangers.

This paperback edition also includes a never-before-seen epilogue, a Q&A with the author, the official If I Should Die playlist, discussion questions, a preview of Amy Plum's next novel, and more!

Amy Plum is the international bestselling author of the Dreamfall series, the Die for Me series, and the After the End series. She spent her childhood in Birmingham, Alabama, her twenties in Chicago and Paris, and several more years in London, New York, and the Loire Valley. Now she lives in Paris and swears she’ll never move again. You can visit Amy online at www.amyplumbooks.com.

PRAISE FOR IF I SHOULD DIE: “[An] exciting, bittersweet conclusion. Tension, danger, and romantic yearning are palpable. The world-building is solid and unique. Recommend to teens who enjoyed Cassandra Clare’s The Mortal Instruments series.” — School Library Journal

“Plenty of well-paced tension. The author keeps the narrative moving along at a sprightly pace and handles the suspense well.” — Kirkus Reviews

“This last book does not disappoint. The author strikes a good balance between the romance and the action of the story. If I Should Die is well plotted with a final twist that will keep readers on their toes.” — New York Journal of Books

“A swashbuckling final episode with plot twists and unexpected revelations.” — ALA Booklist

“There is plenty of romance, danger, and unpredictable turns against a backdrop of Paris. Those looking for something beyond the Twilight series will enjoy these fast reads about immortals.” — Voice of Youth Advocates (VOYA)

PRAISE FOR UNTIL I DIE: “A fast-moving tale of star-crossed lovers.” — Voice of Youth Advocates (VOYA)

“Plum handles the intrigue and builds tension, ending with a major cliffhanger that should compel readers to the final book in the trilogy.” — Kirkus Reviews

“The historical elements and the magic evoked by the Parisian setting work to paint a full landscape that has a deep otherworldly connection while remaining entirely ordinary in the very best way. The story’s twists and turns are well paced and will have readers captivated.” — School Library Journal

PRAISE FOR DIE FOR ME: “I devoured this lush, mysterious romance, which delivers a refreshingly human heroine alongside a hero truly deserving of the title.” — Aprilynne Pike, #1 New York Times bestselling author of the WINGS series

“Action and drama abound. Plum has done an excellent job of setting up the rules for her creations and following them closely. Fans of this genre will have their appetites reignited by this new addition.” — School Library Journal (starred review)

“Move over, Bella and Edward. Plum introduces a world and a story that are sure to intrigue teen readers and will easily attract fans of the Twilight series.” — ALA Booklist