We Live in Water: Stories (Paperback) 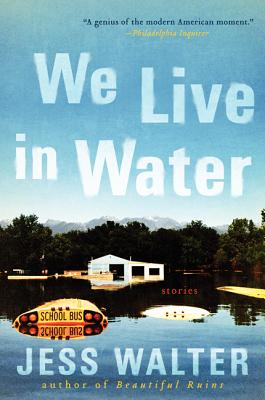 Walter's collection of stories brings the small-town Northwest region to life with an array of down on their luck characters (hobos, gamblers, thieves, etc.). The opening story, my favorite, "Anything Helps," is about a homeless panhandler who wants to buy the new Harry Potter book. Funny but sad yet frighteningly realistic.

I can't quite tell if Jess Walter is poking fun at or painting an affectionate portrait of the Inland Northwest here, which is part of what makes this collection so great. The stories - most of which are set in or around Spokane - find characters in situations that feel unique to the region. Yet thanks to the unique cast Walters presents us with - including people who are homeless, recently-divorced, ex-cons - mixed with his knack for excellent deadpan dialogue, you don't have to be from the area to enjoy them.

“I defy any reader to pick up this amazing collection of stories and not want to read every book Jess Walter has ever written. His writing is staggeringly good. I found myself reading long into the night, not wanting to miss a word.”
— Suzanna Hermans, Oblong Books & Music, Rhinebeck, NY

ONE OF PRESIDENT BARACK OBAMA’S FAVORITE BOOKS OF 2019

From the New York Times bestselling author of Beautiful Ruins, the first collection of short fiction from Jess Walter—a suite of diverse and searching stories about personal struggle and diminished dreams, all of them marked by the wry wit, keen eye, and generosity of spirit that has made him a bookseller and reader favorite

These twelve stories—published over the last five years in Harper’s, The Best American Short Stories, McSweeney’s, Playboy, and other publications—veer from comic tales of love to social satire to suspenseful crime fiction, from hip Portland to once-hip Seattle to never-hip Spokane, from a condemned casino in Las Vegas to a bottomless lake in the dark woods of Idaho. This is a world of lost fathers and redemptive conmen, of meth tweakers on desperate odysseys and men committing suicide by fishing.

We Live in Water is a darkly comic, heartfelt collection of stories from a “ridiculously talented writer” (New York Times), “one of the freshest voices in American literature” (Dallas Morning News).

Jess Walter is the author of six novels, including the bestsellers Beautiful Ruins and The Financial Lives of the Poets, the National Book Award finalist The Zero, and Citizen Vince, the winner of the Edgar Award for best novel. His short fiction has appeared in Harper's, McSweeney's, and Playboy, as well as The Best American Short Stories and The Best American Nonrequired Reading. He lives in his hometown of Spokane, Washington.

“Walter’s got a great ear and a genius for sympathy with America’s new dispossessed.” — Alan Cheuse, NPR's All Things Considered

“Walter is a bighearted man who excels at writing about other bighearted, if broken, men. That generosity of spirit coupled with Walter’s seeming inability to look away from the messy bits, elevates these stories from dirges to symphonies.” — New York Times Book Review

“Walter (Beautiful Ruins) writes-beautifully. . . . Darkly funny, sneakily sad, these stories are very, very good. The algorithm for this debut collection is straightforward: if you like to read, you’ll like this book.” — Publishers Weekly, starred review

“Jess Walter, who is revered for his novels, shows a gritty side in these clear-cut stories... Each word is perfectly placed...[Walter] brings his first story collection to a smashing end.” — Daily Beast

“Mr. Walter brings (his) outlook to short-story writing easily, and with a vengeance… His most bleakly funny, hard-edge book in years.” — Janet Maslin, New York Times

“[Walter] can mine the least scintilla of humor and wit from his characters’ broken lives--people whose dreams will surely not come true but who somehow keep trying.” — Shelf Awareness

“Brims with humanity. A-” — Entertainment Weekly

“This debut story collection from Walter proves he’s as skilled at satire and class commentary in the short form as in his novels…A witty and sobering snapshot of recession-era America.” — Kirkus Reviews (starred review)

“Deliver[s] unexpected laughs while playing with what it is we think we know…As a reader, I delight in Walter’s work. As a writer (humor me here), I curse. He’s so freakishly, fiendishly good, it isn’t fair.” — Seattle Times

“With a cineaste’s eye, [Walter] mov[es] the action at a terrific pace, such velocity and narrative swing…What he makes us understand is bracing, clear. Fiction or no, it is here we see Walter as trusted interlocutor, saying, let me show you, this is where we are now.” — The Oregonian (Portland)

“It is perhaps a grim and fatalistic vision that Jess Walter presents in We Live in Water, yet one that in today’s America seems all-too-recognizable; no, we may not all live in water, but at one time or another, we have all lived in Spokane.” — San Francisco Chronicle

“For over a year, I’ve been waiting for a story collection to floor me the way Alan Heathcock did with Volt. The 13 stories of Jess Walter’s We Live in Water come close.” — Cleveland Plain Dealer

“Black humor is what we expect from Jess Walter. What is different is that the stories give us a sense of the writer’s heart we haven’t gotten from the parade of bright novels.” — Newsday

“There’s a certain magic that comes with reading a good story. Even one that’s not about a magical time…[Walter’s] collection is full of tragic characters — the homeless, the drug-addicted and those who have lost everything to gambling debts. But it is not without humor.” — Across the Board

“Incrementally, profoundly, brutally, [Walter] pulls back the curtain… We Live in Water is a great collection, in fact, and an important contribution to the literature of our region.” — Portland Herald