Krazy: George Herriman, a Life in Black and White (Paperback) 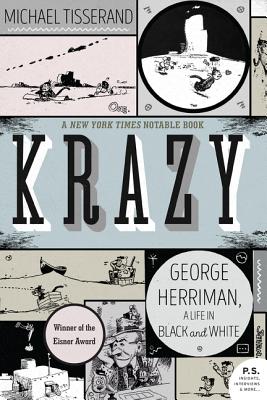 Krazy Kat remains a marvel even more than a century after its debut. Anarchic and wondrous, it stands among the most innovative and influential strips in all of comics history.

But my staff pick isn't Krazy Kat, it's Krazy by Michael Tisserand: a richly detailed and endlessly compelling biography of the strip's visionary creator, George Herriman. From the complex racial politics of New Orleans to the hyper-competitive world of newspaper comics publishing, Tisserand deftly lays out the cultural and historical contexts that informed Herriman's brilliance.

In the tradition of Schulz and Peanuts, an epic and revelatory biography of Krazy Kat creator George Herriman that explores the turbulent time and place from which he emerged—and the deep secret he explored through his art.

The creator of the greatest comic strip in history finally gets his due—in an eye-opening biography that lays bare the truth about his art, his heritage, and his life on America’s color line. A native of nineteenth-century New Orleans, George Herriman came of age as an illustrator, journalist, and cartoonist in the boomtown of Los Angeles and the wild metropolis of New York. Appearing in the biggest newspapers of the early twentieth century—including those owned by William Randolph Hearst—Herriman’s Krazy Kat cartoons quickly propelled him to fame. Although fitfully popular with readers of the period, his work has been widely credited with elevating cartoons from daily amusements to anarchic art.

Herriman used his work to explore the human condition, creating a modernist fantasia that was inspired by the landscapes he discovered in his travels—from chaotic urban life to the Beckett-like desert vistas of the Southwest. Yet underlying his own life—and often emerging from the contours of his very public art—was a very private secret: known as "the Greek" for his swarthy complexion and curly hair, Herriman was actually African American, born to a prominent Creole family that hid its racial identity in the dangerous days of Reconstruction.

Michael Tisserand is the author of The Kingdom of Zydeco, which won the ASCAP-Deems Taylor Award for music writing, and the Hurricane Katrina memoir Sugarcane Academy. He served as editor of Gambit Weekly, New Orleans’ alternative newsweekly. He lives in New Orleans, Louisiana. www.michaeltisserandauthor.com

“One of the many virtues of Michael Tisserand’s richly illustrated biography of George Herriman, the creator of “Krazy Kat,” is its evocation of the early 20th-century newspaper world from which it sprang.”
— Wall Street Journal

“Who was the man behind “Krazy Kat”? This fascinating biography and guide to the work of the cartoonist, who passed for white, tells the full story.”
— New York Times

“Tisserand … has written the rarest kind of book: scholarship that is accessible and captivating, genuinely fun to read. His prose sparkles, smooth and flowing, rich with metaphor and invention.”
— Chicago Tribune

“Krazy, so rich in anecdote and so warm in affection, succeeds in adding a good deal to the wonder of George Herriman’s legacy – mainly by putting the artist in last place on Earth he liked to be: in the spotlight, center stage.”
— Christian Science Monitor

“It’s one of the best true stories told in 2016.”
— Philadelphia Inquirer

“... engaging, revealing…. Herriman’s adventures in newspapering in the early years of the 20th century are alone worth the price of the book.... Whether you’re a longtime Krazy Kat fan, as I am, or a new acquaintance, this biography will enrich your knowledge of the Kat and its creator.”
— Tampa Bay Times

“Perhaps no one in his field is as deserving of a top-notch, in-depth biography as Herriman. And with Michael Tisserand’s Krazy we now have a most valuable, studiously researched, and, indeed, definitive profile of the man that does him full justice.”
— Print

“A visionary strip. Who drew it, and wherefrom? Tisserand’s robust research illuminates, without diminishing, the mystery.”
— Roy Blount Jr.

“An athletic feat of scholarship and an effort of love—like one of Ignatz’s bricks to the head. Tisserand’s immaculately researched and super-readable biography captures the madcap modernist Herriman and the weird America of surreal racial realities and publishing superpowers that shaped his revolutionary art.”
— Hillary Chute

“George Herriman was a poet in a new visual language. As a man, he was an enigma to match his greatest creation, the sublime Krazy Kat. Michael Tisserand has done a masterful job of illuminating this life lived in the shadowy borderlands of racial identity; along the way he also gives a brilliant overview of the golden years of American cartooning. Krazy is a monumental work of biography about a true American genius.”
— Tom Piazza

“This is a gripping read at the intersection of pop culture and American history.”
— Publisher’s Weekly

“An absorbing study of a genius with a secret.”
— New Orleans Times-Picayune

“Tisserand presents a well-researched, engaging biography of George Herriman (1880-1944), creator of the comic strip Krazy Kat.... At every step, this work brilliantly re-creates the milieu of its subject’s life by shading in the historical context. A significant book for comics scholars and those interested in tracing Herriman’s development from novice to master of the medium.”
— Paul Steins, Library Journal