The Long Way Home: An American Journey from Ellis Island to the Great War (Paperback) 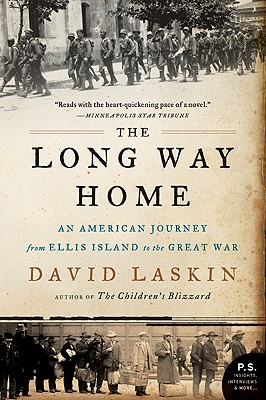 “Moving, revealing, and lovingly researched, this book is a must read, and a great read, for any of us whose forebears came from overseas—meaning just about all of us.” — Erik Larson

The author of the award-winning The Children’s Blizzard, David Laskin, returns with a remarkable true story of the immigrants who risked their lives fighting for America during the Great War.

In The Long Way Home, award-winning writer David Laskin traces the lives of a dozen men who left their childhood homes in Europe, journeyed through Ellis Island, and started over in a strange land–only to cross the Atlantic again in uniform when their adopted country entered the Great War.

Though they had known little of America outside of tight-knit ghettos and backbreaking labor, these foreign-born conscripts were rapidly transformed into soldiers, American soldiers, in the ordeal of war. Two of the men in this book won the Medal of Honor. Three died in combat. Those who survived were profoundly altered–and their heroic service reshaped their families and ultimately the nation itself.

Epic, inspiring, and masterfully written, this book is an unforgettable true story of the Great War, the world it remade, and the humble, loyal men who became Americans by fighting for America.

David Laskin is the author of The Children's Blizzard, winner of the Midwest Booksellers' Choice Award for nonfiction and the Washington State Book Award. His writing has appeared in The New York Times, The Wall Street Journal, and Smithsonian magazine. He lives in Seattle, Washington.

“David Laskin’s The Long Way Home is a brilliant blending of social analysis and personal narrative, which recovers the experience of a ‘lost generation’—the immigrant ‘greenhorns’ who became Americans through service on the battlefields of World War I.” — Richard Slotkin, author of Gunfighter Nation

“Moving, revealing, and lovingly researched, this book is a must read, and a great read, for any of us whose forebears came from overseas-meaning just about all of us.” — Erik Larson, author of The Devil in the White City

“A riveting remembrance of the Great War by a master writer. David Laskin, by homing in on the lives of a dozen immigrants to Ellis Island, is able to tell a grand American saga about the true cost of democracy. All around a deeply compelling narrative.” — Douglas Brinkley, author of The Wilderness Warrior

“Laskin’s tracing of young immigrants, figuratively and literally, from Ellis Island to the trenches of World War I France blends moving personal stories, sociology, culture and military history. The result is a marvelous evocation of what it means to become an American and the many paths to that end.” — Joseph Persico, author of Eleven Month, Eleven Day, Eleventh Hour

“Riveting. . . . With the epic history of the Great War as his backdrop, Laskin has vividly brought these extraordinary, colorful men to life and created, overall, an absolute masterpiece.” — Andrew Carroll, editor of War Letters and Behind the Lines