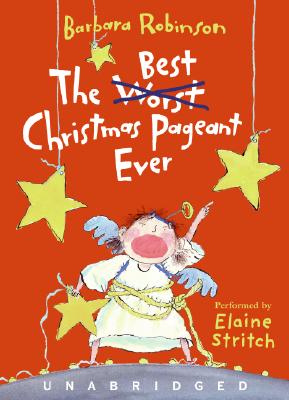 By Barbara Robinson, Elaine Stritch (Read by)
$17.95
Unavailable at this time.

Laughs abound in this bestselling Christmas classic by Barbara Robinson! The Best Christmas Pageant Ever follows the outrageous shenanigans of the Herdman siblings, or “the worst kids in the history of the world.” The siblings take over the annual Christmas pageant in a hilarious yet heartwarming tale involving the Three Wise Men, a ham, scared shepherds, and six rowdy kids.

Ralph, Imogene, Leroy, Claude, Ollie, and Gladys Herdman are an awful bunch. They set fire to Fred Shoemaker’s toolshed, blackmailed Wanda Pierce to get her charm bracelet, and smacked Alice Wendelken across the head. And that’s just the start! When the Herdmans show up at church for the free snacks and suddenly take over the Christmas pageant, the other kids are shocked. It’s obvious that they’re up to no good. But Christmas magic is all around and the Herdmans, who have never heard the Christmas story before, start to reimagine it in their own way. This year’s pageant is definitely like no other, but maybe that’s exactly what makes it so special.

Barbara Robinson has written several popular books for children, including My Brother Louis Measures Worms, The Best School Year Ever, The Best Halloween Ever, and the enormously popular bestselling novel The Best Christmas Pageant Ever, first published in 1972, which was made into a classic TV movie and on which this book was based. The play The Best Christmas Pageant Ever is produced annually in theaters, schools, and churches all over the world. Ms. Robinson has two daughters and three grandchildren.

Elaine Stritch, a superlative dramatic actress, won a Tony® Award for her one-woman show, Elaine Stritch, At Liberty. A four-time Tony® nominee, she has starred in numerous plays and musicals including Bus Stop, Who's Afraid of Virginia Woolf, Company, and A Delicate Balance. She received a Grammy nomination for her recording of The Best Halloween Ever.