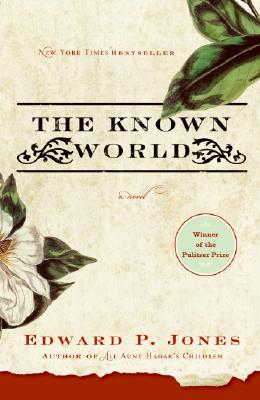 Henry Townsend, a farmer, boot maker, and former slave, through the surprising twists and unforeseen turns of life in antebellum Virginia, becomes proprietor of his own plantation—as well his own slaves. When he dies, his widow Caldonia succumbs to profound grief, and things begin to fall apart at their plantation: slaves take to escaping under the cover of night, and families who had once found love under the weight of slavery begin to betray one another. Beyond the Townsend household, the known world also unravels: low-paid white patrollers stand watch as slave “speculators” sell free black people into slavery, and rumors of slave rebellions set white families against slaves who have served them for years.

An ambitious, courageous, luminously written masterwork, The Known World seamlessly weaves the lives of the freed and the enslaved—and allows all of us a deeper understanding of the enduring multidimensional world created by the institution of slavery. The Known World not only marks the return of an extraordinarily gifted writer, it heralds the publication of a remarkable contribution to the canon of American classic literature.

Edward P. Jones, the New York Times bestselling author, has been awarded the Pulitzer Prize, for fiction, the National Book Critics Circle award, the International IMPAC Dublin Literary Award, and the Lannan Literary Award for The Known World; he also received a MacArthur Fellowship in 2004. His first collection of stories, Lost in the City, won the PEN/Hemingway Award and was short listed for the National Book Award. His second collection, All Aunt Hagar’s Children, was a finalist for the Pen/Faulkner Award. He has been an instructor of fiction writing at a range of universities, including Princeton. He lives in Washington, D.C.

“Jones has written a book of tremendous moral intricacy.”
— The New Yorker

“A masterpiece that deserves a place in the American literary canon.”
— Time

” An exemplar of historical fiction. . . [it] will subdue your preconceptions, enrich your perceptions and trouble your sleep.. . .The way Jones tells this story. . .recalls Cormac McCarthy, William Faulkner and Gabriel Garcia Marquez.”
— Newsday

” An exemplar of historical fiction. . . [it] will subdue your preconceptions, enrich your perceptions and trouble your sleep.. . .The way Jones tells this story. . .recalls Cormac McCarthy, William Faulkner and Gabriel Garcia Marquez.”
— Starred Library Journal

“Astonishingly rich. . .The particulars and consequences of the ‘right’ of humans to own other humans are dramatized with unprecedented ingenuity and intensity, in a harrowing tale that scarcely ever raises its voice. . . . It should be a major prize contender.”
— Kirkus Reviews (starred)

“A strong, intricate, daring book by a writer of deep compassion and uncommon gifts.”
— Peter Matthiessen

“If Jones. . .keeps up this level of work, he’ll equal the best fiction Toni Morrison has written about being black in America.”
— Speakeasy

“One of those rare works of fiction that both wound and heal.”
— O Magazine

“’The Known World’ is a great novel, one that may eventually be placed with the best of American Literature.”
— San Diego Union-Tribune

“Brilliant....Glorious....[The Known World] belongs on the shelf with other classics of slavery, like Toni Morrison’s “Beloved.”
— Atlanta Journal-Constitution

“Fascinating . . .There is grief and fear, genuine affection an envy in this complex and fine novel.”
— Philadelphia Inquirer

“Extraordinary.....Nothing...quite prepares readers for the imaginative leaps and technical prowess of ‘The Known World.’”
— Seattle Times

“Beautifully written . . .[it] ought to enjoy the massive readership that Charles Frazier’s runaway hit, Cold Mountain did.”
— USA Today

“Brilliant...Jones’ novel movingly evokes one small landscape of a larger map that so stubbornly yields up its truths today”
— St. Louis Post-Dispatch

“Stunning....Pitch-perfect....Too much cannot be said about Mr. Jones gifts as a storyteller and a stylist.”
— The Washington Times

“Once you start the book you are hooked....Consider this novel necessary reading.”
— Fort Worth Star-Telegram

“This...magical novel will touch you in a profound way.”
— People (4-Starred Critic's Choice)

“Complex, beautifully written, and breathtaking...the book will knock the wind out of you with the depth of its compassion.”
— QBR: The Black Book Review

“Heartrending....[The Known World] walks with the pace and solemnity of the Bible.”
— Dallas Morning News

“Jones has written a book of tremendous moral intricacy.”
— The New Yorker

“Destined for a permanent spot on the...shelf of great American novels about slavery, next to Morrison...and Faulkner.”
— Boston Globe

“A grand and inspired work of historical fiction. . .[It] deserves every word of praise that comes its way.”
— Chicago Tribune Books

“A masterpiece that deserves a place in the American literary canon.”
— Time magazine