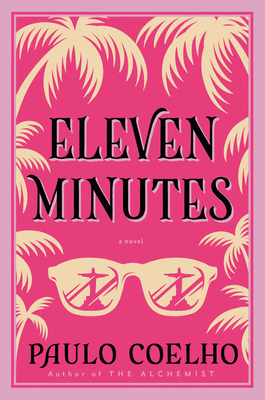 By Paulo Coelho
$15.99
On our shelves now at one or more of our stores

Tells the story of a protagonist named Maria, an innocent Brazilian young woman who tries to understand love. Her view of it is tarnished as she is left heartbroken from it. She meets a young painter and this type of love changes her view. Will she accept this Love or Run away from it?

Eleven Minutes is the story of Maria, a young girl from a Brazilian village, whose first innocent brushes with love leave her heartbroken. At a tender age, she becomes convinced that she will never find true love, instead believing that “love is a terrible thing that will make you suffer. . . .” A chance meeting in Rio takes her to Geneva, where she dreams of finding fame and fortune.

Maria’s despairing view of love is put to the test when she meets a handsome young painter. In this odyssey of self-discovery, Maria has to choose between pursuing a path of darkness—sexual pleasure for its own sake—or risking everything to find her own “inner light” and the possibility of sacred sex, sex in the context of love.

Paulo Coelho, born in Rio de Janeiro in 1947, is one of the bestselling and most influential authors in the world. The Alchemist, The Pilgrimage, The Valkyries, Brida, Veronika Decides to Die, Eleven Minutes, The Zahir, The Witch of Portobello, The Winner Stands Alone, Aleph, Manuscript Found in Accra, and Adultery, among others, have sold over 175 million copies worldwide, and The Alchemist has been on the New York Times bestseller list for over 360 weeks.

Paulo Coelho has been a member of the Brazilian Academy of Letters since 2002, and in 2007, he was appointed United Nations Messenger of Peace. He is also the most followed author on social media.

“A rare combination of craftsmanship, imagination and inspiration.”
— Fort Worth Star-Telegram