Gentlemen and Players: A Novel (Paperback) 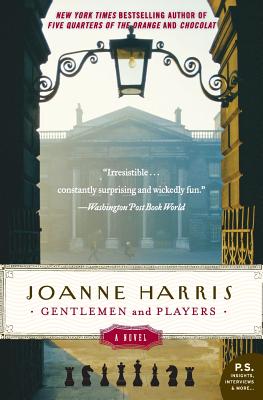 A diabolical chess match is underway between the venerable St. Oswald's school for boys and a ghost from its past bent on revenge. At stake is not only the reputation of the school, but the very lives of its staff and students. This is a quintessential British psychological thriller from a very unexpected source.

To dare, to strive, to conquer.

For generations, elite young men have attended St. Oswald’s School for Boys, groomed for success by the likes of Roy Straitley, the eccentric classics teacher who has been a revered fixture for more than 30 years. But this year, things are different. Suits, paperwork, and Information Technology rule the world, and Straitley is reluctantly contemplating retirement. He is joined in this, his 99th, term by five new faculty members, including one who—unknown to Straitley and everyone else—holds intimate and dangerous knowledge of St. Ozzie’s ways and secrets, it’s comforts and conceits. Harboring dark ties to the school’s past, this young teacher has arrived with one terrible goal: Destroy St. Oswald’s.

As the new term gets underway, a number of incidents befall students and faculty alike. Beginning as small annoyances—a lost pen, a misplaced coffee mug—they soon escalate to the life threatening. With the school unraveling, only Straitley stands in the way of St. Ozzie’s ruin. But the old man faces a formidable opponent—a master player with a strategy that has been meticulously planned to the final move.

Joanne Harris is the author of seven previous novels—Chocolat, Blackberry Wine, Five Quarters of the Orange, Coastliners, Holy Fools, Sleep, Pale Sister, and Gentlemen & Players; a short story collection, Jigs & Reels; and two cookbook/memoirs, My French Kitchen and The French Market. Half French and half British, she lives in England.

“[A] disturbing yet strangely rewarding morality tale . . . Not every chess game ends with a checkmate.”
— Publishers Weekly (starred review)

“Riveting . . . The checkmate is a bold stroke -- so audacious as to send readers, including this one, backtracking.”
— Houston Chronicle

“A complex, well-crafted murder mystery, with its author’s trademark blend of wit, wisdom and magic.”
— Time Out London

“Fun with a neat twist ... it’s a bit like A.J. Wentworth squaring up to the talented Mr. Ripley.”
— The Independent

“A literary gobstopper with an aniseed heart.”
— Independent

“[Harris] turns to the literary thriller, with stunning results . . . This is one hypnotic page-turner.”
— Booklist (starred review)

“[A] clever story of obsession and revenge . . . .[Harris] has scored another success.”
— Daily Telegraph (London)

“One of those rare books that grips and holds you . . . [B]oth socially important and vastly entertaining.”
— Chicago Tribune

“Don’t start this one late in the evening, unless you plan to stay up all night. It’s that gripping.”
— Seattle Times

“Best of all is a dazzling climactic twist . . . . its last move is a winner.”
— New York Times Book Review

“[A] tense, perspective-shifting narrative ... [A] page-turning climax that ... avoids the easy out of a tidy ending.”
— Tampa Tribune

“The gold standard for this year’s best mystery...[GENTLEMEN AND PLAYERS] left me breathless...a delightful read.”
— Salon.com