Bookselling as a Latina

We had an author event scheduled on February 1 at our Ravenna store with Jeanine Cummins for her new book, American Dirt. I planned on attending, not as an employee of Third Place Books but as someone interested in what the author had to say. I also had a question.

Here is what I would have asked Jeanine Cummins at the event:

You have stated that you wanted this book and yourself to be a bridge when it comes to the conversations about immigration in this country. The conversation has shifted, as you know. Do you have any plans of engaging in an open conversation with the community of writers who are deeply hurt and have raised concerns about this book?

Unfortunately I won't be getting my chance to ask this question.

I have read the book and simply put, I did not enjoy my reading experience. I could write a review but Myriam Gurba and Parul Sehgal put it better. You can read what they have to say here and here. You should also listen to this NPR interview here by Maria Hinojosa where she interviews Myriam Gurba, Sandra Cisneros, Luis Alberto Urrea, and Jeanine Cummins.

I encourage you to read them, especially Myriam Gurba's review.

As the controversy continued on, and topics like diversity in publishing became widely discussed, I was hopeful. I felt (and still feel) that there is a movement happening.

Then this letter was released from Flatiron to explain their cancelation of Ms. Cummins’ tour. 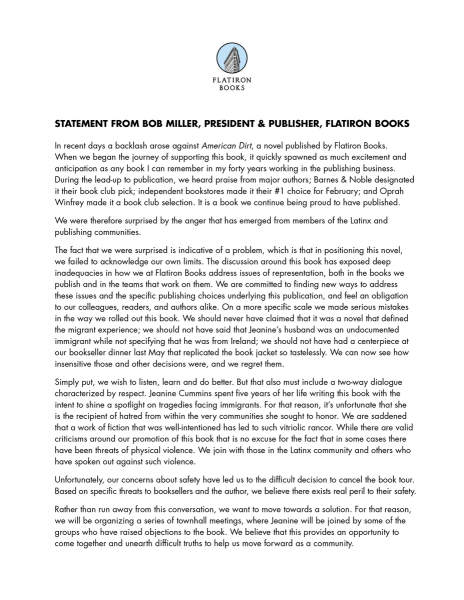 It left me completely stunned. I had  been following this story for weeks leading up to the release of the book. I listened to the Latinx community, especially the Mexican and Mexican-American writers, who, early on, felt there were some serious problems with this book. I talked about it endlessly with my co-workers. The rage was building up in me. A rage I am all too familiar with.

Reading Flatiron’s response, especially the bottom half, which carelessly links the entire Latinx community to feelings of hatred and threats of violence against Ms. Cummins, took me back to a time in my life that has stayed with me since the day it happened.

I was in college and had a job. A new employee was hired who was incredibly friendly, and I took it upon myself to show her around. That first week in, she stuck by my side, even opting to have lunch with me on a few occasions. Then one day another co-worker, who liked to refer to people by their last names, said, "Miss Hernandez, what you up to today?"

The new employee's face dropped and she asked me, "Are you Mexican?"

I replied, "No, my father is Cuban." She said “oh,” and continued eating her lunch. For two weeks after that, she went from incredibly friendly to cold and at times rude. I finally asked her why she was being so cold towards me. Did I do something wrong?

She simply said, "I didn't know you were a SPIC because you don't look like one."

I was livid. I took my concerns to management and, as anyone who knows me will know, I am incredibly passionate and vocal. I was told to calm down and one of the managers said jokingly, "Don't go beat her up now." It wasn't until another employee complained about several racist remarks she made to him that real action took place.

On that day though, the anger and pain I expressed did not mean I would act out in violence. So when this letter equated the anger and pain that has been expressed by the Latinx community with danger and physical violence, I was reminded of all the times when my passion and opinions have been met with irrational fear.

We all know comments on the internet can get ugly fast. But someone saying they plan on attending a reading to give the author a piece of their mind does not equal hatred or violence. We just want to be heard.This supposed apology from Flatiron starts by owning up to their mistakes, but then ends with condemning an entire community and equating criticism with violence. You cannot in one breath apologize for the insensitive stereotypes you played into and then in the next breath play into another stereotype.

Flatiron, I sincerely hope you listen in the weeks coming and really invite writers from the Latinx community to these town hall events you plan on organizing. I just hope you can do better than this!

I’m a bookseller and have been for almost five years. I take great pleasure suggesting what books people should read, rather than telling people what they shouldn’t read. So I will end this with a book recommendation.

I am currently reading a wonderful memoir called, Children of the Land by Marcelo Hernandez Castillo.

It's about immigration and how it has fractured the author's family in ways that left me heartbroken. The books opens with ICE raiding the author's home, looking for his father who was deported years earlier. There are guns but there is no dramatic shootout where people are killed. But the suspense I felt reading those first few pages was real. More so than I ever felt when reading American Dirt.  I think Children Of The Land can do what the publishers claimed American Dirt could do. Children of the Land opens your eyes to the realities of what is going on at the border, but does so without playing into any stereotypes. It doesn't need a big shootout to get your attention. It is also about family, hardships, tough truths and what it means when people say they will do anything for their family. Anyone with complicated family dynamics will find something they can relate to in this book. I will have a proper review up soon at our Lake Forest Park store as soon as I am done.

I want to thank anyone who took the time to read this post. I also want to thank the amazing people I work with who listened to me, valued my opinion and gave me the space to process my thoughts. I especially want to thank Robert who took so much time to listen and share his thoughts with me. I feel heard. 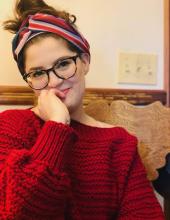 Rosa is from New Jersey and thinks Books and Tacos should be more of a thing. Will read anything that she finds interesting but favors literary fiction. Is a firm believer that if a book isn't grabbing you after 100 pages, you should toss it...gently.