When I was 13 I stole a book from the local library. I mean, I did return it eventually so maybe "stole" isn't the right word. I borrowed it without going through the proper check out procedures. And I don't want anyone to report me and get me banned forever. So please don't tell my mom.

Every Sunday for as long as I can remember, no matter what new city we lived in, my mother would take me and my younger sisters to the library. It was often the only consistent thing about our childhood. We were each allowed one book, which, as I got older and moved on from the Hank the Cowdog series, was never enough. But one of my sisters haaaaaaated reading and I would often bribe her with doing her chores if she would check out a book for me. I was all about the bartering system, and though I got stuck doing the worst chores it was totally worth it. 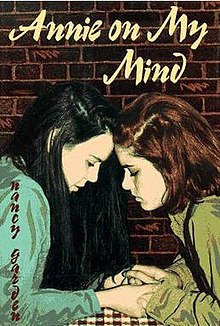 he summer before high school, I was filled with an odd sense of anxiety. I was always hunched over, like some teenage version of Quasimodo. I tried to make myself smaller, to take up as little space as I could. Hoping no one would look at me too long and see my big secret. I mean, I barely understood what I was hiding myself, but I knew I was afraid of it. So those Sunday library expeditions were always something to look forward to. A safe, quiet place where I could perch my gargoyle body in a bean bag chair and devour as maaaany books as I could finish in an afternoon without worrying about anybody trying to figure me out. And that summer I was finally allowed to venture to the YA section. A HUGE DEAL. YA was no longer in the kids area! In fact, it was on the opposite side of the library. This terrified my mother, someone who had been conditioned to believe through episodes of Oprah and the Nightly News that no matter where your child went, they were def going to get kidnapped. So I only had a brief 10 minute window where I was allowed to be alone with the books before I had to be back in the kids section.The YA section was relatively new and had less than a bookcase worth of books so it wasn't hard to pick through them.

And one day, I noticed a new book on the shelf. The spine read Annie On My Mind and when I pulled the book out to look at the cover, my stomach started fluttering. On it, two girls were hunched over at a table, grasping at each others hands. I flipped it over, suddenly overly aware of where I was and all the people around me, certain someone could see what I was reading.

"From the moment Liza Winthrop meets Annie Kenyon at the Metropolitan Museum of Art, she knows there is something special between them. But Liza never knew falling in love could be so wonderful... or confusing."

I knew I needed to read this book, I knew I had to take it with me. But I also knew my mother would neeeever let me check it out. Even if she didn't read the back, the cover was suspicious enough. And even if I could slip it by her, I couldn't risk my father seeing it. This book was just asking for trouble and posing questions I was still years away from answering. But I knew I could not leave it behind. What if someone else checked it out? And never returned it!? Or damaged it!?!  What if they accidentally packed it up with them and moved away and I never saw it again!!?!!?? Hiding it in the library might have been a possibility. But then I would have to wait an entire week to read it and I needed to read it right then.

Looking up at the clock I realized my ten minutes were nearly up. My mother would be looking for me soon. So I quickly made the only decision I could and discreetly removed the loud and crinkly cover and hid it in the small space between the bookcase and the wall. The book, I tucked in the inside pocket of my coat and then grabbed some other random book off the shelf...and immediately felt guilty. But I needed this book. And I knew the librarians would understand! Hopefully. I would absolutely bring it back the next Sunday, slip the cover back on and sheve it. No one would even notice. I had it completely planned out, except I began to nervous sweat. My face got hot, my palms were slippery, and the anxiety was making me ill. I came up with ten million back up plans by the time I covered the small distance back to the kids section. But turned out I had nothing to worry about. Being a shy generally goody two shoes kid, my mother just assumed I was sick and I played that sick card to the fullest extent and acted so over the top you would think I was an orphan dying of consumption in the streets of 1912 Paris. (I'm all about having a backstory)

Annie on my Mind, the book that launched my criminal career. Sigh. I devoured that book. I read it so quickly the first time around, I was so afraid that my parents would realize what I was reading and toss it out. Up until that point, every movie, every TV show, every one I knew was straight. I barely understood that being gay was evan an option...that I could be gay. But reading this book changed everything. I suddenly felt like I could breathe. I didn't feel so alone. Nancy Garden's writing felt so honest, and though it shows how much harder it was for gay teens 30 years ago, it also ends on this beautiful note of inspirtation and hope. Garden did not render Liza and Annie into martyrs; she gave them dreams and desires, just like everyone else. By doing so, she made her characters people.

Annie On My Mind was published  in 1982. Almost 20 years before Ellen came out on the Oprah Winfrey show. 12 years before "Don't Ask, Don't Tell" was signed into law by the Clinton Admin. 18 years before Vermont became the first state to allow civil unions for same sex couples. And 24 years before I would find it and sneak read it under my bed. And for that, I owe Nancy Garden everything.